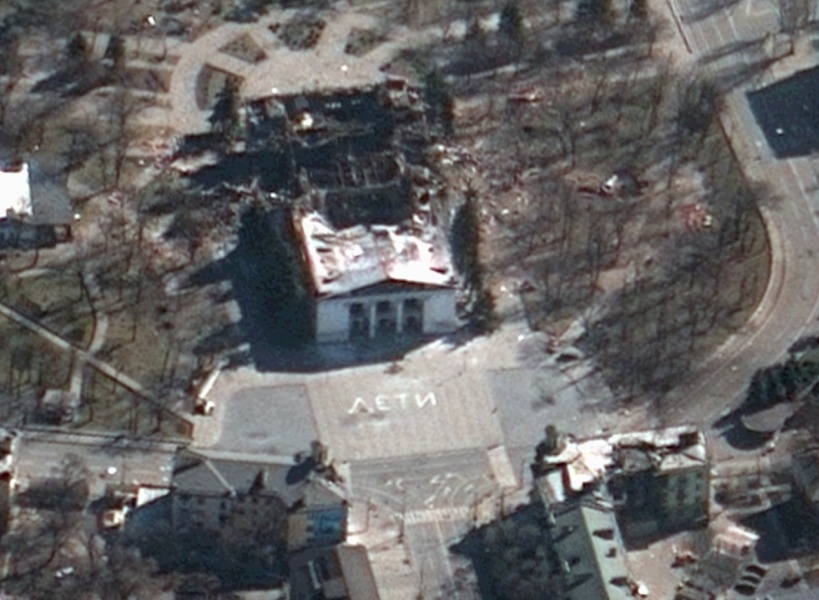 Russian media and a number of popular Telegram channels, including Soloviev and Sputnik, are circulating the relevant version, voiced by German journalist Thomas Roeper, who allegedly made his conclusions after visiting Mariupol on a press tour, organized by the Russian side.

His reasoning is that the total destruction of the Mariupol Drama Theater suggests that it has exploded from within. That is, it is not the Russians who bombarded the theater that should be blamed for the 300 civilian deaths, but the Ukrainian Army.

First off, Roeper is not actually a journalist. He is a blogger who has lived in St. Petersburg since 1998, previously worked for Russian insurance companies, and now runs the Anti-Spiegel blog, where he systematically spins fake news and Russian propaganda narratives.

For example, he claimed that the photo of the victims in the Mariupol maternity hospital was a hoax, citing the same arguments as the Russian media spread – that the young woman in the photo is an actress, who was even able to change clothes for different shoots, and that there were no patients in the hospital at the time of the strike.

The woman in question, a Ukrainian blogger Marianna Pidgurskaya, gave an interview to the Russian media, confirming that she was indeed a patient of the targeted maternity hospital.

By the way, the German media had earlier taken note of Thomas Roper and the lies he was spreading about the war in Ukraine. Before the war, he was noted for circulating false allegations about the coronavirus and vaccination campaigns.

While Russian authorities have publicly denied their involvement in the strike on the theater, solid evidence, published in open sources, refutes these claims. There is evidence of an air strike on another facility in Mariupol (the Neptune Public Pool) on March 16. Also, footage from the theater, published by the Azov Regiment on March 10, denies Russia’s allegations of a hostage situation there: it is obvious that people took refuge there and received assistance. In addition, the statement by the Russian Ministry of Defense that the theater had been mined and blown up from the inside goes against an earlier statement by the Kremlin-controlled “DPR” militia chief, who claimed that the theater was allegedly struck by Ukrainian tanks. Apparently, the Russian mouthpiece had not enough time or mental capacity to agree on a common line of lies with his Russian handlers.

Russia has violated international humanitarian law in Ukraine by deliberately attacking civilians, and strikes on the maternity hospital and drama theater in Mariupol can generally be described as war crimes. This conclusion was reached by an independent OSCE Mission, which included lawyers Wolfgang Benedek, Marco Sassoli, and Veronika Bilkova. The report, published on April 13, 2022, says that independent experts have obtained credible evidence that violations of basic human rights (right to life, prohibition of torture and other inhuman and degrading treatment or punishment) took place mainly in Russian-controlled territories of Ukraine.

The report documents cases of inhuman behavior by Russian forces in Ukraine. This includes evidence of attacks on civilians, shelling of medical facilities, rape, looting, and forcible deportation of civilians to Russia, according to the mission. And this, of course, doesn’t suit Russia, which keeps looking for ways to shift the responsibility for their crimes on others, as well as searching for assets who would help them push their claims. But for their crimes, including the bombardment of the Mariupol Theater sheltering civilians from Russian atrocities, they will be held accountable anyway.