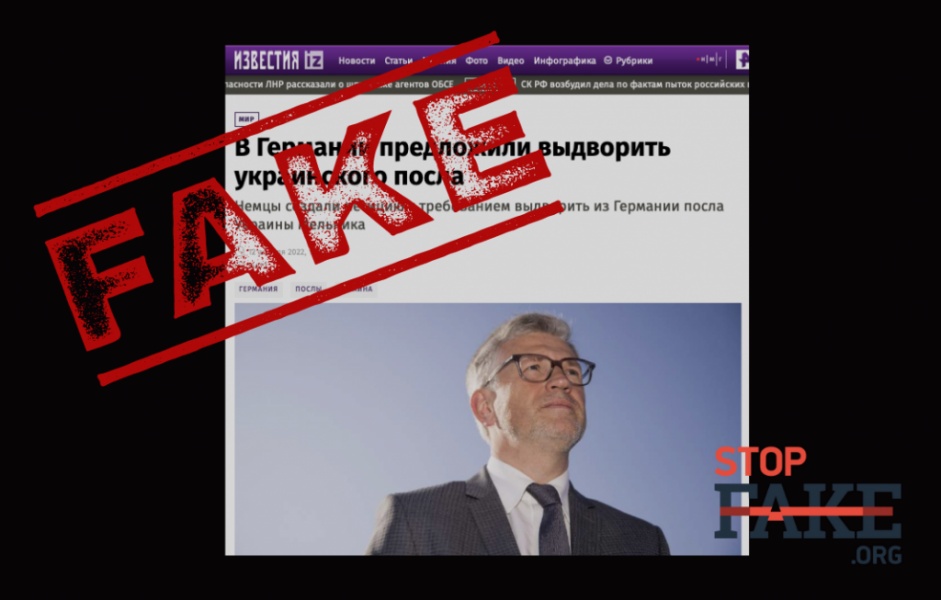 Russian media claim that Germany is allegedly looking into expelling Ukrainian Ambassador Andrij Melnyk. Izvestia reports that the German position is allegedly based on the assumption that the Ukrainian diplomat has gone too far, allowing himself hate speech against German policies, which goes against diplomatic rules. In fact, there is no talk of any diplomatic scandal.
The Russian media are trying to present the situation in a way favorable to the Kremlin, while this is all about a petition registered on change.org. That is, Moscow is manipulating public opinion by claiming that a petition on an international website represents actual interests of the majority of Germans and that it is a call on the German authorities to act. In fact, Ambassador Melnyk is not being expelled from Germany, while Russian diplomats  are, which is an absolutely logical and proven fact. The German federal government has declared 40 Russian diplomats personae non grata.

As is known, such petitions have long been an acceptable way of monitoring public opinion and analyzing the existing issues. In fact, anyone could file a petition on change.org, which could be signed regardless of citizenship or nationality. Such efforts are designed to draw attention to a particular problem, not to oblige official bodies to act or respond, having no legal force whatsoever. Signatories are allowed to remain anonymous, with each signature being linked only to an email address. The author of the petition calling for the Ukrainian ambassador to be expelled is Jurgen Peters from Germany. There is no information other than the name and country in the author’s profile. It is also impossible to see who exactly supported the petition. As of April 13, the move was supported by about 19,000 users, and it is quite possible that these votes were pumped up by the Russians. At the same time, petitions filed against Russia’s war in Ukraine are created on a daily basis, being signed by hundreds of thousands of people around the world – that’s without coercion and cheating.

In fact, the issue of the Ukrainian ambassador’s expulsion from Germany is not on the table. Against the backdrop of Russia’s full-scale invasion of Ukraine, Ambassador Andrij Melnyk has been consistent in criticizing the stance of German authorities on Russia, which has been slowing down arms supplies and introduction of Russia sanctions. German President Frank-Walter Steinmeier even had to publicly explain his position in the wake of Melnyk’s statements. The head of the CSU parliamentary group in the Bundestag, Alexander Dobrindt, noted that Melnyk represents his country perfectly, being in a situation that is hard to fathom.

At the same time, a completely different situation has developed as regards Russian diplomats in Germany. The German federal government declared 40 Russian diplomats personae non grata after the world saw the fallout of the Russian occupation of Kyiv region. Obviously, this cannot but upset and anger the Russian side, which is trying to somehow level the accusations, now looking for more pretexts to denigrate Ukraine and its Western partners in the ongoing confrontation. This is confirmed by multiple fake reports that have filled the Russian information space. The main task of such information attacks is to justify the aggressive terrorist actions in Ukraine and to provoke even greater aggression and support for the Kremlin’s predatory intentions.