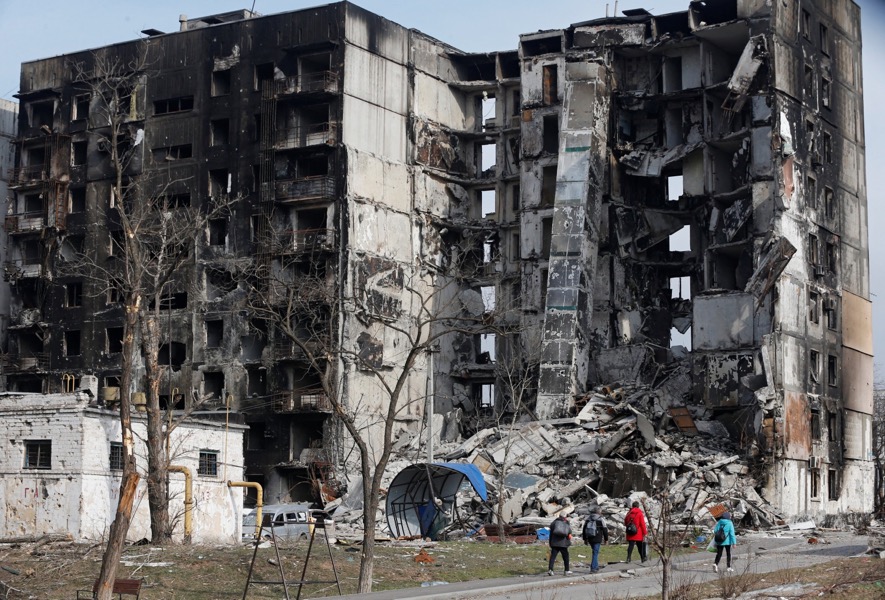 On April 28 in Mariupol, the Russian occupation authorities plan to hold a journalistic press tour in order to shift the blame for the genocide and the actual destruction of the city to Ukraine.

Journalists have been brought in from Russia in advance, who will ask the “right” questions, which are designed to form the only possible opinion among the consumer about blaming the Ukrainian side for the tragedy.

Russia is trying to hide the traces of its crimes and in this way makes insinuations that it will voice to journalists in order to form public opinion favorable to the Kremlin.

The press tour participants will visit all the places of the city, and the Kremlin propaganda by all means will blame the Ukrainian side for the tragedy.

Russian propaganda is trying to prevent a repetition of the high profile events that took place in Bucha, after which anti-Russian sentiment in the world increased sharply. In addition, the scale of the tragedy in Mariupol is much larger, because even according to preliminary estimates, more than 20 thousand civilians died there. For this, in the spirit of Soviet traditions, Russian propaganda plans to portray the aggressor as a victim.

Russia has prepared “alternative facts” that will be voiced by so-called “eyewitnesses” who will falsely claim about the atrocities committed by the Ukrainian army. It will be told in detail about how exactly the Ukrainian side shot civilians and destroyed urban infrastructure. One can draw an analogy with the speech of Marianna Vyshemirska, who was evacuated by the Ukrainian military from the Mariupol maternity hospital in early March and subsequently emerged on the territory of the Russian Federation. There, this person gave an interview to the Russian media, in which she accused the Ukrainian army of atrocities and shelling.

The RF’s propaganda machine is repressive in nature and practices any means to spread lies. Including bribery, moral and physical pressure, overpersuasion in order to achieve their vile goals.

The “press tour” is also aimed at the residents of the Russian Federation, who need to once again portray Ukraine as an aggressor country, and Ukrainians as champions of “Nazism”. Thus, Putin is trying to get at least a psychological mobilization of Russian society and massively whip up anti-Ukrainian hysteria.

Despite the blocking of many non-Russian media, Russians can still receive alternative information about the tragedy taking place in Ukraine. Russian society is completely exposed to propaganda, but Putin wants to create a society completely devoid of the ability to perceive alternative ideas.

The Russian invaders are in a hurry to cover up the traces of their crimes, because before events in Mariupol, the tragedy of any other Ukrainian city that suffered during the war fades. Russian murderers carried out genocide of civilians in Mariupol on a national basis, the industrial infrastructure of the city and its housing stock were completely destroyed. The dead were buried in parks, squares and wastelands.  After the end of World War II, not a single city in Europe suffered such destruction.

The tragedy that took place in Mariupol is many times greater than what happened in the entire Kyiv region. On the territory of the year, in addition to the RF’s military personnel/ there are the so-called “Kadyrovtsy”. There are numerous testimonies of mass executions, torture, and rape of women. Girls 7-9 years old were also raped. Many of the victims subsequently died.

The bacchanalia of the Russian military in Mariupol produced such a number of victims that mobile crematoria were used to eliminate evidence, akin to how the Nazis burned people during World War II.

The scale of the crimes committed by Russian murderers is still unknown. The evidence is carefully destroyed, a lot of people were forcibly taken to the Russian Federation, where they turned into hostages.

Mariupol is the embodiment of an all-Ukrainian tragedy that occurred through Putin’s fault and the moral approval of the Russians — a nation of murderers and rapists. Today, the Kremlin will deny any involvement in the destruction of the beautiful, flourishing city on the shores of the Sea of Azov, which served as home to half a million Ukrainians.

The Kremlin’s insinuations should not mislead the entire civilized world, which has taken the side of Ukraine despite the Kremlin’s attempt to destroy it. This “press tour” is a pitiful attempt to hide the atrocities of the “Russian soldiers” against the backdrop of an ever-increasing anti-Russian resonance in the world and a prologue to holding similar “events” in the rest of the occupied territories of Ukraine, where the genocide of Ukrainians is also being carried out.