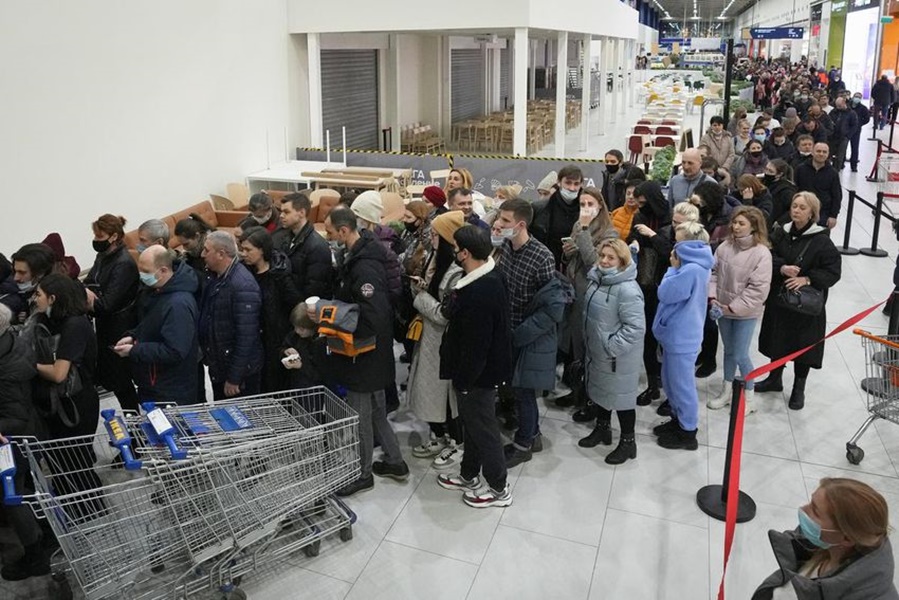 — According to Bloomberg, in two weeks since Ukraine’s invasion, Russia has suffered perhaps the worst fall since the 1990s crisis, which has already slashed Russia’s GDP by $30 billion, or 9% in 2022.

— The British Center for Economics and Business Research estimates that Russia’s GDP will fall by 14% in 2022 as a result of sanctions.

— According to JPMorgan analysts, Russia may face default. International sanctions against Russia have significantly increased the likelihood of the country defaulting on its public debt. Russia is due to pay off more than $ 700 million in government bonds this month. It is also projected that the Russian economy will fall by 35% in the second quarter of 2022 due to sanctions and by about 7% in the first year of their operation. Bloomberg Economics forecasts a 9% drop in GDP in 2022.

— According to experts from the World Bank and the IMF, Russia is close to defaulting on foreign debt and on the verge of a deep recession.

— The correspondent bank JPMorgan received payments on coupons of Russian Eurobonds March 16th, 2022, after processing the bank transferred funds to the paying agent Citi. Currently, the default is postponed at least untilApril 4th, 2022.

— According to Morgan Stanley & Co., Russia’s chances of paying off its foreign debt are declining as bond prices fall, the country recedes and restrictions on payments increase. The grace period for Russian foreign bonds in 2023 and 2043 ends on April 15 — Russia’s chances of making payments are dwindling, and the delay in April means a default «as in Venezuela.»

— The International Energy Agency (IEA) notes a reduction in total (Russian) exports by 2.5 million bpd, where oil accounts for 1.5 million bpd and oil products by 1 million bpd. The IEA estimated Russia’s oil losses due to sanctions at 3 million barrels per day (bpd).

— More than three hundred companies refused to work in Russia or to cooperate with the country and its citizens, as well as to supply their products and services there. As a result, experts estimate that about 3 million Russians will become unemployed.

Losses of the Russian market from the exit of the largest advertisers can reach 51 billion rubles, from blocking Instagram — 211 million dollars.

— Rating agency Standard & Poor’s (S&P) on March 17th, 2022, lowered Russia’s rating to ‘CC’ from ‘CCC-‘, as the country reported difficulties meeting debt payments due on its dollar-denominated 2023 and 2043 Eurobonds. Ratings of some of the largest companies in Russia were downgraded to «C» and «CCC-» with a negative outlook. The changes affected companies such as Gazprom, Rosneft, Russian Railways, MTS, Alrosa and X5 Group.

— International rating agency Moody’s downgrades Russia’s ratings to Ca from B3, the outlook is negative. Liabilities with such a rating are very speculative and probably in the process or very close to default, with little prospect of repayment of principal and interest.

— Moody’s also reduced ratings of 95 non-financial Russian companies. Long-term ratings of most companies from the list were reduced to «CaA2». Forecasts of changes in all ratings are «negative», which reflects significant risks to Russia’s macroeconomic stability.

— Fitch has downgraded Russia’s Long-Term Foreign Currency Issuer Default Rating (IDR) to ‘C’ from ‘B’. The ‘C’ rating reflects Fitch’s view that a sovereign default is imminent.and has downgraded 26 Russian natural resource companies, placed the ratings of 28 entities on Rating Watch Negative (RWN) and maintained one company on RWN. Gazprom’s rating was downgraded from «BBB» to «B» with a negative outlook. The ratings of Gazprom Neft, Tatneft, Novatek, Lukoil, Bashneft and others have dropped significantly.

— The London Stock Exchange has stopped listing shares of 27 issuers from its contacts with Russia, Morgan Stanley excluded them from the index of developing countries, as the country is now “not suitable for investment”. Among the companies that are excluded from trading on the stock exchange – En +, Sberbank, Gazprom, Lukoil and Polyus.

— The LSE’s index business, FTSE Russell, also said Russian stocks will be deleted from all of its equity indices. On March 14, 2022, FTSE Russell removed 4 British companies (Evraz, Polymetal, Petropavlovsk and Raven Property Group), focused on Russia, from their indices.

— According to preliminary estimates, the total wealth of Russian billionaires decreased by 80 billion US dollars.

— The capitalization of European business, which is associated with Russia, has decreased by 100 billion US dollars since the beginning of the aggravation.

— The stock market collapsed in Russia. Russian stocks showed the biggest drop in history. The Dow Jones Russia GDR Index, which tracks London-traded Russian companies, has plunged 98% in two weeks. The slump has wiped out $572 billion from the market value of 23 stocks, including Gazprom PJSC, Sberbank of Russia PJSC and Rosneft PJSC.

— S&P Dow Jones Indices has announced that after the end of the business day on March 31st, 2022 it will exclude bonds of Russian issuers from indices calculated by the company.

— On March 2nd the price of Russian Sberbank stocks on the London Stock Exchange fell to 1 cent. Sberbank has announced its withdrawal from the European market. VTB Bank is preparing to leave the European market. ECB assesses that Sberbank Europe AG and its subsidiaries in Croatia and Slovenia are failing or likely to fail.

— The London Metal Exchange suspended electronic trading in nickel on March 16th, 2022, just moments after the world’s main market for the metal reopened for business following a week-long shutdown.

— The US has banned the export of US dollars to Russia, and the EU has banned the supply of euro banknotes to Russia. Lithuania has limited the amount of cash in euros (60 euros) that can be exported to Russia for personal use.

— In an effort to quell the crisis, Russia’s central bank more than doubled its key interest rate on February 28, 2022 — from 9.5% to 20% — and announced the release of local reserves to support bank liquidity.

— The EU, the United States, Canada and the United Kingdom are imposing restrictive measures that will prevent the Central Bank of Russia from using its international reserves in such a way as to undermine the impact of Western sanctions.

— Since March 18th, 2022, Sberbank is not able to make transfers to other banks in U.S. dollars, Canadian dollars, pounds sterling, Danish and Swedish crowns.

— Russia’s VTB Bank closes its London branch due to sanctions;

— The American bank Citigroup will close its work in several directions and will not attract new customers. UniCredit Bank and OTP Group are considering the option of terminating its activities in Russia. BNY Mellon ceases new banking business in Russia.

— In Russia, since the end of February, trading in the NFT market has fallen by 32%.

— The world’s largest cryptocurrency Binance will no longer support Mastercard and Visa cards issued in Russia.

— According to Bloomberg, the cryptocurrency market is considered too small to circumvent the sanctions imposed on Russia.

— Canada and the UK have imposed 35% tariffs on all goods from Russia.

— The US, EU, UK, Canada deprives Russia of the most-favored-nation treatment (MFN) in trade. Japan has announced a similar intention.

— The United States has banned the import of Russian oil and gas, banned citizens from making new investments in Russia’s energy sector. From 16.03.2022 the US bans the export of both weak (beer, wine) and strong (rum, whiskey, vodka, tequila) alcoholic beverages, tobacco products, including cigars, any perfume and eau de toilette, fur and leather products, silk, camping equipment, luxury clothing and footwear worth more than $1,000, precious stones, pearls, silver jewelry, non-monetary gold, expensive watches, pianos and antiques, engines for ships and other equipment, some new and used vehicles (including motorcycles and mopeds).

— The largest consumers of Russian oil are boycotting it and have in fact been subject to individual sanctions. The consulting company Energy Aspects said that 70% of Russian oil «is struggling to find buyers.»

— Canada and the United Kingdom have announced plans to ban all crude oil imports from Russia. Poland is going to impose an embargo on Russian coal and propose not to buy oil in the coming months. Denmark will refuse Russian gas;

— Poland will not renew its long-term contract for the purchase of Russian gas, which expires on December 31st, 2022. Bulgaria to stop using Russian gas by 2023;

— Japan has banned the export of oil refining equipment and technology and of technological products (266 goods and 26 technologies) to Russia, including semiconductors, communications equipment, sensors, radars and encryption devices, programs for machines that make microchips, effective since March 18th,.2022.

— The EU and Switzerland have banned the export to Russia of certain goods and services of the oil sector, certain goods and technologies that can be used in aviation and space, as well as the supplying of certain services related to these goods, such as insurance, repairs, inspections, mediation services and financial assistance.

— On March 9th, 2022, the EU imposed restrictions on exports to Russia of goods related to maritime navigation and radio communications. The EU plans to abolish the most-favored-nation treatment for Russia, ban the export of cars worth more than 50,000 euros (including Audi, BMW, Mercedes, Ferrari and Porsche) and boats, planes, chairlifts and motorcycles worth more than 5,000 euros.

— On March 15th, 2022, the EU and UK banned the export to Russia of luxury items, including cars, haute couture fashion, works of art;

— The EU authorities have decided to completely ban the supply and leasing of aircraft, helicopters and other aircraft to Russia, as well as their insurance and maintenance. The Bermuda Civil Aviation Authority (BCAA) has suspended the airworthiness certificates of Russian Bermuda-registered aircraft.

— Boeing, Airbus, Embraer and engine manufacturer CFM International have stopped servicing Russian airlines, including the supply of spare parts, pilot training in Russia, and the purchase of titanium in Russia.

— The United Kingdom is imposing aviation sanctions, which give the right to detain any Russian aircraft and ban the export of aviation or space goods to Russia.

— China has refused to supply Russian airlines with spare parts for aircrafts.

Companies that left Russia and stopped cooperating with Russia