On the night of June 22 to 23, Russian invaders fired at the Dnipropetrovsk region, there are wounded. The enemy hit the Kryvorizhsky district 6 times and insidiously hit the residential quarters. Two people were injured in Apostolove. They were hospitalized. There is a destruction of housing. The city is partially without light and water supply. There were found cassette ammunition in the streets and in the yards after shelling. To date, 16 cassette elements have already been discovered. The consequences of a recent enemy missile attack on the oil depot in the Nonomoskovsk district were eliminated about 108 hours. As a result of Russian missiles attack, 3 people died, 14 get burnt and were injured, 8 of them in the hospital.

In Sievierodonetsk, the invaders have hit the territory of a brick and fiberglass factories, as well as the chemical non-standard equipment plant. The building of II passing of Azot plant is damaged. Lysychansk was fired several times. Destruction in one of the schools of the city was recorded. For a day — three wounded, who were hospitalized to hospital in Kramatorsk and Pavlohrad. The day before yesterday after shelling, a man’s body was found late in the evening without signs of life. New destruction in Novoivanivka — 8 houses, Hirne — 8, Zolote — 9. In addition, at night the Russian army resorted to air strike in Verhnokamianets, Sievierodonetsk and Syrotyn, aircraft and rocket strikes — in Hirne. 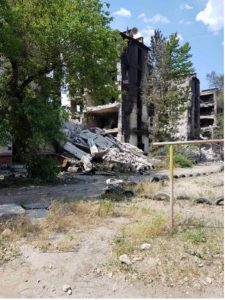 Seven wounded in the Kharkiv region, among them are two children in the last 24 hours. Yesterday, in Kharkiv, at about 23:00, they fired at the industrial region, warehouses were in fire. Previously, no one was injured. At night, the invaders fired at Derhachi again, and the office building was partially destroyed. At night, the Russians fired at the Pechenihi village, a private enterprise was damaged, a fire occurred. The shelling continued in the morning. Private houses are destroyed. According to preliminary data, there are 7 wounded civilians, 2 of them are children, the information is updated. 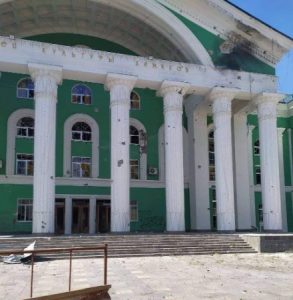 The Russian army once again fired at the Sumy region. This afternoon, the enemy launched a drone with explosives into the territory of the Krasnopil community. There are no victims and destruction. In the evening the enemy fired Grad launchers on Yunakivka community from the territory of Russia. There were 30 explosions. They used prohibited weapons — phosphorus munition. A child was injured and hospitalized. The economic structure is also damaged. About 20:00, the Russians opened mortar fire on Seredyna-Buda community, about 20 explosions were recorded.Information about the victims and destruction is specified. A police car hit a mine in Okhtyrka district, the Sumy region, during the patrol of the territory, two employees were injured. Later, a second explosion was heard at the place where explosives experts and investigators worked. As a result, five more were injured. One person died at the scene.

In the photo below, the consequences of Horihiv’s enemy shelling in the Zaporizhzhya region. Yesterday, the enemy shot several hours in a row on the civilian infrastructure of the village. Residential buildings, roads, power lines and gas supply are destroyed. 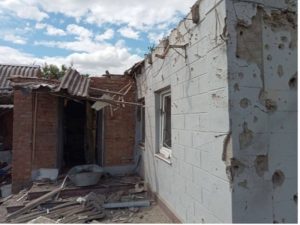 Today Russian missiles attacked again Mykolaiv and Odesa region. Three ground-based cruise missiles from the occupied territory of the Kherson region hit Mykolaiv. The production and social infrastructure of the city war targeted. One person is wounded. Details are clarified.

During Russian aggression, more than 917 children were injured in Ukraine. As of June 23, 2022, the official number of victims among children did not change. It is 324 of such. The number of wounded is increased to 593. Most of all children in the Donetsk region-308, Kharkiv-175, Kyiv-116, Chernihiv-68, Lugansk-54, Kherson-52, Mykolaiv-48, Zaporizhzhya-31, and Sumy region-17. Due to bombing and shelling by the RF Armed Forces, 2056 educational institutions were damaged, 212 of them are completely destroyed.