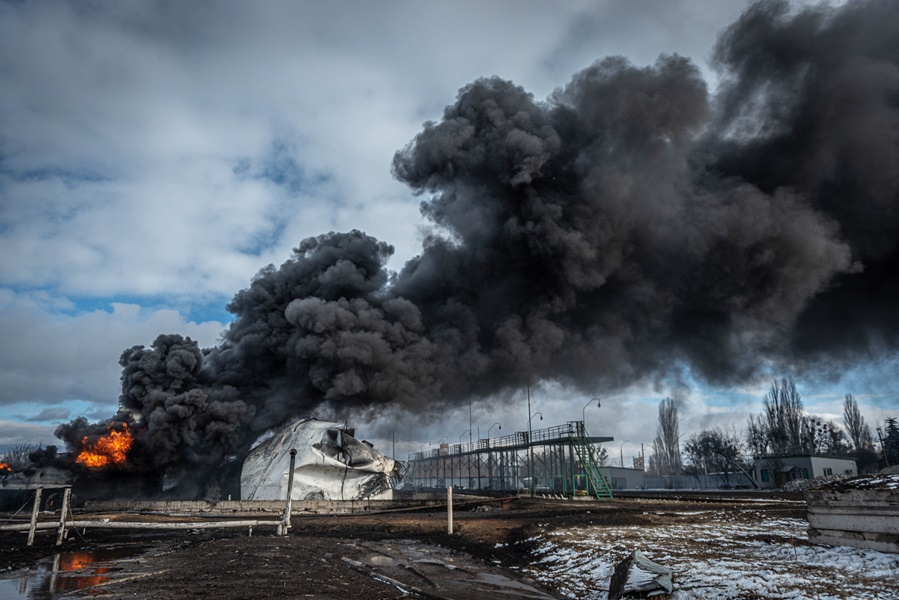 Since the beginning of the large-scale Russian invasion the Special Taskforce of the State Ecological Inspectorate of Ukraine recorded 245 crimes against the environment. 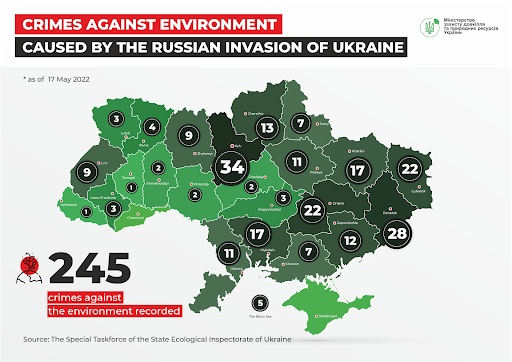 “Most Ukrainians are familiar with the situation when, after reading the news about missile strikes on oil depots or the detonation of chemical tanks, they start looking for information about environmental hazards nearby. Because of hostilities on the territory of Ukraine and the ongoing information war, we understand that it is important for our citizens to have a unified official source of verified information on their smartphones. That is why we have created a web resource and a mobile application of our Ministry called EcoZagroza» — commented Ruslan Strilets, Minister of Environmental Protection and Natural Resources of Ukraine.

The remediation of the consequences of the occupation by Russian troops, which lasted 35 days, is still underway at the Chornobyl nuclear power plant and in the Exclusion Zone. According to a preliminary calculation, the damage caused by occupiers in the Exclusion Zone is estimated at nearly UAH 2.5 billion.

Zaporizhzhya NPP continues to work in the occupation under the control of the Russian military. The Russians are trying to hide the consequences of their shelling of the Zaporizhzhya NPP training center and forbade employees of the station to bring personal mobile phones to their workplaces. The occupiers have dug trenches, and placed sandbags, concrete blocks, and other engineering barriers along the entire perimeter of the nuclear power plant.

On May 16, Ukraine received the first batch of aid from the US Government through the IAEA Response and Assistance Network (RANET). The batch included portable spectrometers to quickly determine the type and radionuclide composition of ionizing radiation sources in order to maintain nuclear safety.

On May 11, the shelling in the Kramatorsk district of the Donetsk region damaged a warehouse with ammonium nitrate. The Slovyansk city military administration located nearby asked the residents to limit staying in the open air and close the windows tightly for 24 hours after the accident.

On May 12, twelve Russian missiles hit the infrastructure of the city of Kremenchuk. Most of the missiles were aimed at the Kremenchuk refinery. The firefighters put out the fire, which broke out at the plant as a result of a missile strike.

On May 16, the Russian military hit a warehouse with ammonium nitrate in the Kharkiv region. The explosion caused a  release of a large column of orange smoke. According to information from the local military administration, the explosion does not pose a threat to the local residents. The amount of damage to the environment will be determined by specialists. 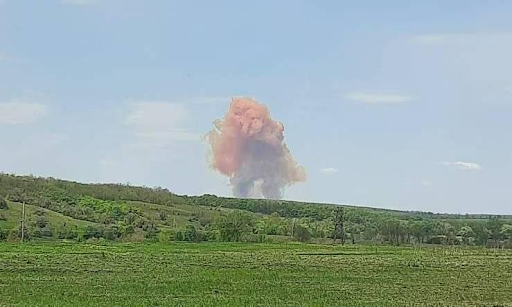 On May 17, Russian troops launched an airstrike at the Knauf Ukraine building materials plant in Soledar in the Donetsk region. As a result of the bombing, a large-scale fire broke out.

During the week, numerous shellings of the phenolic plant in New York and the Avdiivka Coke Plant in the Donetsk region, as well as of the Azot plant in Severodonetsk, the Luhansk region, were recorded.

Large-scale fires on infrastructure and industrial facilities lead to poisoning of the air with hazardous substances. Pollutants can be carried by winds over long distances. 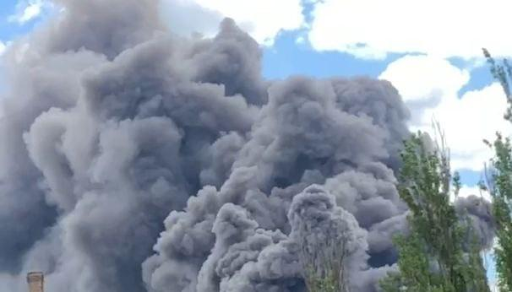 On May 19, Minister of Environmental Protection and Natural Resources of Ukraine Ruslan Strilets during the briefing «Environmental “hot spots» of the war: Chornobyl, Energodar and others» commented on the situation with pollution of the Sea of ​​Azov due to shellings.

«The Ministry of Environmental Protection and Natural Resources has no evidence confirming pollution of the Sea of ​​Azov as a result of the shelling of Azovstal. We are currently analysing the data. Both the State Emergency Service and the State Ecological Inspection are actively working on this. So far, we have no confirmation of pollution of the Sea of ​​Azov,» said the Minister.

It is currently impossible to objectively assess what happened at Azovstal and the potential damage to the ecosystem of the Sea of ​​Azov as relevant specialists cannot access the steelworks’ territory.

The Ministry has already obtained the information on the pollutants stored at Azovstal and studied the  plant’s emergency response plans. After processing this data and identifying potential risks, the Ministry will issue a separate statement.

The Russians are using remote mining systems, installing unguided minefields in settlements, and leaving behind a large number of particularly dangerous explosive devices, which are deadly to civilians. Oleh Bondar, head of the SES Department for Pyrotechnic Works and Humanitarian Demining, estimates that demining of Ukrainian territories could take up to 5-10 years.

On May 11, Russian troops used cluster and phosphorus munitions prohibited by international conventions during an attack on the Kryvyi Rih district of the Dnipropetrovsk region. On May 18, the Russians shelled a school in Avdiivka (Donetsk region) with white phosphorus munitions. The school was destroyed by fire.

According to the RebuildUA project report, more than 1 100 buildings were destroyed in the village of Gorenka in the Bucha district of the Kyiv region. In March 2022, the settlement happened to be on the frontline. Russian troops purposefully destroyed the village, including shelling from the Grad multiple rocket launchers. Destruction of cities and settlements leads to pollution by construction debris and asbestos. The consequences of such pollution to the environment will last for years. 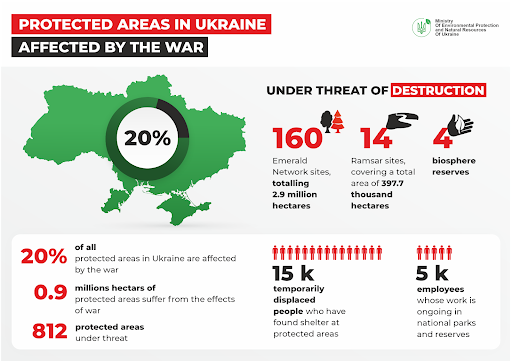 On May 12, a Russian missile hit a protected area of the island of Khortytsia in Zaporizhia, causing a fire.

In Kharkiv, the Russians destroyed the only plant gene bank in Ukraine. The projectile hit the building of the Institute of Plant Breeding named after academician Yuriev. Collected for decades, the samples of more than 160,000 species of plants from around the world were stored in the building. There are only a few such gene banks in the world. It will be impossible to recover a large amount of the samples.

Due to the active hostilities, birds can change their migration routes through Ukraine. Russian troops are fighting in protected areas of international importance, destroying rare and endemic species habitats. Due to the fighting, some unique habitats of endemic species might disappear.

Drinking water in Ukraine is one of the targets of the occupiers. Russian troops are currently:

— polluting freshwater by shelling plants and warehouses near water bodies, which leads to hazardous substances leaks;

— trying to steal the water, for example, in an attempt to supply the Crimea through the North Crimean Canal.

All these actions cause irreparable damage to aquatic ecosystems and affect human life and health.

On May 17, Dorit Nitzan (Regional Emergency Director at WHO) said that the destruction of the water supply system in Mariupol could lead to the spreading of infectious diseases, including cholera.

Russian troops are attacking infrastructure along the Black and Azov Seas and anchored ships, polluting water and spreading toxins into the sea. In particular, on May 17, the Russians launched the fifth missile strike on the bridge across the Dnister estuary, which is located near Zatoka village in the Odesa region.

On May 14, two sea mines were brought to the sea surface by stormy weather close to the shores of a beach in the Odesa region. It is estimated that Russian troops have placed 400 to 600 mines in the Black Sea, threatening both shipping and marine life.

Turkish marine biologists report that more than 100 dolphins have been washed up on the Turkish coast of the Black Sea, a high number compared to previous years. Earlier, a significant increase in dolphins’ deaths was reported by employees of the National Nature Park «Tuzla Estuaries» in the Odesa region. The sonars of Russian warships, which affect the hearing organs of dolphins, have a negative impact on animal health. Having lost orientation, dolphins in panic can throw themselves out to the coast and die. Blocking of maritime traffic in the Black Sea by the Russian fleet, and mining of waters and the seashores prevent scientists from collecting more specific data on the number of affected dolphins.

On May 18, Mariupol Mayor Vadym Boychenko said that the bombing of Azovstal could damage a dam that holds back tens of thousands of tons of concentrated hydrogen sulfide solution. Large-scale leaks can destroy the flora and fauna of the Sea of Azov. Hazardous substances can also enter the Black and Mediterranean Seas. Immediate admission to the site by international experts and the United Nations is needed to study the situation and prevent a world-class environmental catastrophe.

Previous reports of the Ministry of the Environmental Protection and Natural Resources of Ukraine on environmental crimes committed by Russian troops since the start of the full-scale invasion of Ukraine are available following the links: