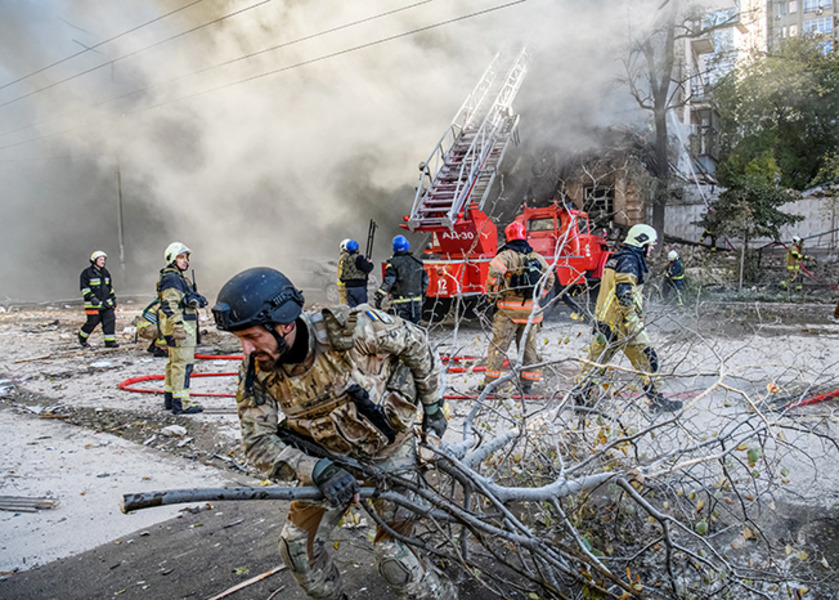 Russia carried out a new attack on the capital a week after the massive shelling of Ukraine on October 10.  Today, the capital was massively attacked by Iranian Shahed-136 drones.  Objects of the critical infrastructure of Kyiv were damaged, a multi-storey residential building including.  Residential buildings were also damaged by the blast wave. So far, three people were killed, including a 59-year-old woman and two young people under thirty. Three more people have been hospitalised with injuries of various degrees, 18 people were rescued from the rubble. According to the Kyiv City Prosecutor’s Office, the killed couple were both born in 1988.  The woman was 6 months pregnant. The rescue operation continues.

It is also known that the Dnipropetrovsk region, Sumy region, Odesa, and Zaporizhzhia were attacked by the Russian Federation during the night and in the morning of October 17.

Apartments for the Israeli Embassy workers are being rented out in a residential building next to the targeted building in Kyiv.  Israel should still participate more actively in helping Ukraine.  It is possible that the Russians are fulfilling Iran’s request to attack the Israelis in Ukraine.

All night and all morning, the enemy terrorizes the civilian population.  Kamikaze drones and missiles attack all of Ukraine.  The Russian Federation is a real terrorist country.  The killing of the civilian population, shelling of peaceful cities and civilian objects by the army of the aggressor country are war crimes for which Russia must be punished.  Currently, Ukraine needs an anti-drone system and the latest anti-aircraft defense to provide its citizens with at least some kind of peace.