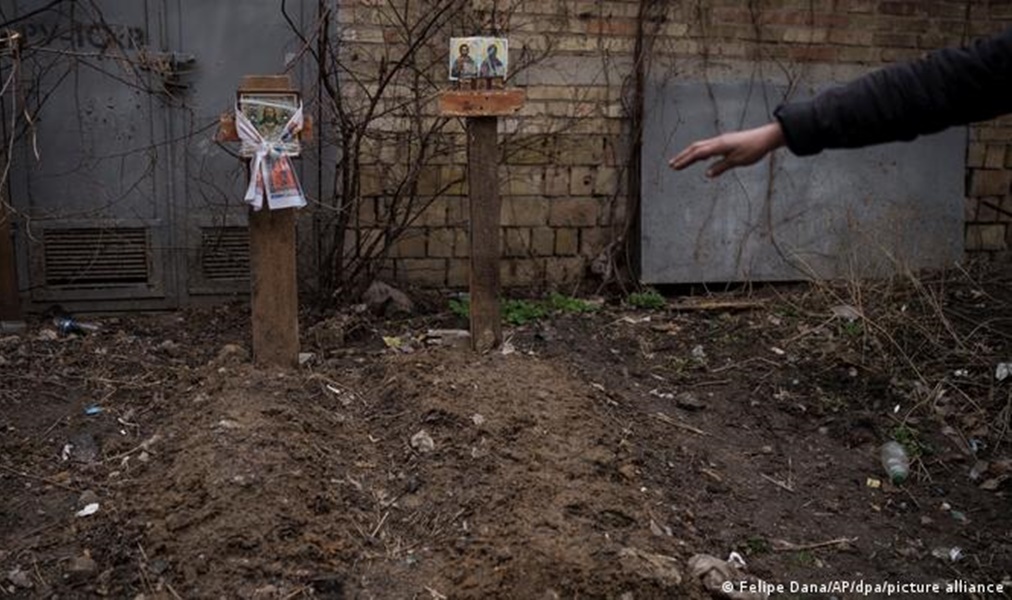 The Minister of Interior Denys Monastyrsky said that Ukrainian officials recorded cases of casualties among the civilian population in every city that had been occupied by Russian troops.

In front of the Bundestag in Berlin, hundreds of activists held a rally to remind people that the Russian soldiers are torturing and killing Ukrainians.

“While Russia and its military are torturing and killing Ukrainians in Bucha, Irpin, Mariupol and many other cities, Germany and EU continue to pay for these crimes against humanity by buying Russian gas, oil and (still) coal. That’s why we demand a full embargo on Russian energy supplies.” the organizers said. 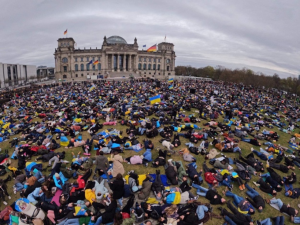 Borodianka is one of the most devastated towns in Kyiv region, the Minister of Internal Affairs Denys Monastyrsky has said during a press tour organized by Ministry of Interior for Ukrainian and foreign media representatives.

“Locals tell how aircraft came in and fired missiles from low altitudes at the houses in the early days of the war,” Monastyrsky said.

Russian troops are shelling Zolote and Hirske towns in Luhansk region. A hospital in Sievierodonetsk and houses in Lysychansk were also damaged, the head of Luhansk Regional Military Administration Serhiy Haidai reports.

“Russians do not care about civilian population – they shelled “strategic” residential buildings in Rubizhne and Sievierodonetsk. The level of destruction is equally high in Popasna and Hirske – the latter as well as Zolote are being wiped out of the map.” 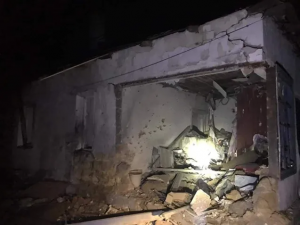 At least 167 Ukrainian children were killed in Russian full-scale attack on Ukraine, and 297 more were injured. The data do not include the number of the dead and wounded in Mariupol and other places of active hostilities.

The occupation forces began to establish fake local administrations in the temporarily occupied Enerhodar. First, 34 members of the so-called “public council of self-organization of Enerhodar” gathered and elected “head of the city administration” Andriy Shevchyk – a deputy of the City Council from “Opposition Platform — For Life” party.

Then he signed the “order” on dismissal of the lawfully elected acting mayor Dmytro Orlov, and all heads and members of executive bodies of the local government.

In Boromlya town, Sumy region, new bodies of tortured by the invaders persons are being found, says the head of the Regional Military Administration Dmytro Zhyvytsky.

He also said that the area was currently being demined. Shells are found in people’s vegetable gardens. Many mines were planted at Trostyanets chocolate factory, where Russian troops settled.

Russian invaders forcibly deported patients and staff of the city hospital No.4 in Mariupol to the temporarily occupied territory of Ukraine. The fate of people remains unknown. The City Council thinks that people can on at the territory of the self-proclaimed “DPR” or on the territory of Russia.

Almost 90% of those who were killed in Bucha have bullet, not shrapnel, wounds, says the city mayor. There were several sites with mass graves found: in particular, the territory of the enterprise “Ukragropostach” and children’s camp “Promenysty”.

As of April 6, 320 civilians were found dead in Bucha. Every day there are new bodies found.

In Luhansk region there are no undamaged hospitals left, the Head of the Regional State Administration Serhiy Haidai reports. According to him, the invaders shelled every medical institution in Luhansk region. 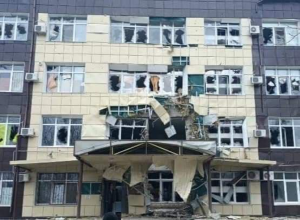 In Lviv, people are beginning to build the first container town as a temporary accommodation for those internally displaced persons who came from the zones of active hostilities. 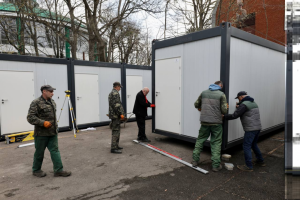 Russian troops activities are now mainly focused on the offensive in the east of Ukraine, according to UK intelligence.

Russian aircraft and artillery are launching attacks along Donbas confrontation line to limit or deprive the Ukrainian army of its supply chains and increase the pressure on the Ukrainian government. The United Kingdom confirms that the Russian army has a low morale, and also lacks personnel and supplies.

In the center of Borodianka, Kyiv region, the first dead bodies were found under the rubble, says the curator of the humanitarian headquarters of the Kyiv Regional Military Administration Oleksiy Kuleba. The exact number of victims remains unknown.

Russian troops launched an air strike on the overpass near Barvinkove station (Donetsk railway). It is the only Ukrainian-controlled railway exit from Slovyansk, Kramatorsk and Lyman. Three evacuation trains are temporarily blocked in Sloviansk and Kramatorsk.

Putin’s spokesman Dmitry Peskov admitted that the Russian army “suffered significant losses” in the war against Ukraine. But he went on saying that Russia’s retreat from some territories was a “gesture of goodwill.”