Satellite images show that the bodies of killed civilians in Bucha appeared on the streets more than three weeks ago, when the city was occupied by Russian troops.

One of the videos taken by a local council deputy on April 2, shows numerous bodies, scattered along Yablunska street in Bucha. Some bodies lie next to the explosion crater. Others are near abandoned cars. Three bodies are located next to the bicycles. Some of them have their hands tied behind their backs with white cloth. 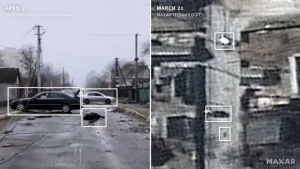 The genocide, perpetrated by the Russian invaders in Ukraine may be the largest in Europe since the World War II, reports the Center for Strategic Communications and Informational Security.

According to the Center, the number of civilians  casualties in Irpin and Bucha has already exceeded the number of internationally recognized war crimes cases in the Croatian cities of Gospić and Vukovar.

According to preliminary estimates, 80,000 square kilometers of Ukraine need to be cleared due to contamination by mines and explosive remnants. The UN calls Ukraine one of the most mine-contaminated country in the world, the Ministry of Foreign Affairs of Ukraine and the United Nations Office for the Coordination of Humanitarian Affairs report.

«Unfortunately, due to Russian`s full-scale war, much of the work done together with international partners in the cleaning of the territories has been nullified. At the same time, the urgency of educational activities is growing. The knowledge about mine danger, which ordinary Ukrainians (especially children) have managed to gain since 2014, will save more than one life», – the Foreign Ministry said.

During the shelling in Donetsk region, invaders hit the Phenolic Plant 7 times. The shelling damaged 3 fractionating columns, 3 collections of marketable products, interfloor overlaps of the oil distillation structure, material pipelines, tank car and metal structures. There is no danger for the environment.

In the Konotop district of the Sumy region, three tortured civilians were found at the sites of the former invaders` camps, said Dmytro Zhyvytskyi, head of the Sumy Regional State Administration.

Russian invaders are regrouping their troops and focusing on preparing an offensive  in Eastern Ukraine in an effort to establish the full control over the Donetsk and Luhansk regions, states the press office of the General Staff of the Ukrainian Armed Forces.

Invaders are trying to improve the position of units in the Tavriya and Pivdennobuzhsky operational districts, as well as move the units withdrawn from Polissya and Sivershchyna to new operational areas.

In addition, the General Staff records the movement of weapons and military equipment in Belarus in the direction of the railway stations of Gomel, Yelsk and Mozyr for loading on railway trains.

Rescuers and doctors are unable to get to some areas of Popasna and Rubizhne, due to ongoing shelling and street fighting. In Rubizhne, dead people are buried in the yards, says the Head of the Luhansk Regional State Administration.

As of 8 am since the beginning of the full-scale Russian invasion in Ukraine, at least 165 children have been killed and 266 injured, according to Lyudmyla Denysova, the Verkhovna Rada Commissioner for Human Rights.

Russian invaders fired on the railway between Kramatorsk and Slovyansk, the press office of Slovyansk Military Civil Administration reports.

«Tuesday, April 5. The night was anxious. Due to the air strikes, the railway line between Kramatorsk and Slovyansk was destroyed. We will know how the evacuation trains will be run after the situation is clarified», – the statement reads.

Russian invaders attacked Kramatorsk again. As a result, the school was destroyed, according to the city council. 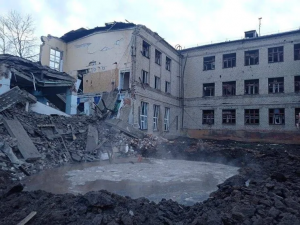 In Luhansk region, a tank with nitric acid was hit by Russian invaders’ firing. The Head of the Regional State Administration urged people to stay home and tightly close all windows. Besides, he recommended to prepare wet face masks.

It should be noted that acid steam can cause an irritant effect on the respiratory tract. Mild poisoning leads to signs of bronchitis, dizziness, drowsiness; whereas severe poisoning causes pulmonary edema. Nitric acid ocular contact causes severe damage to the cornea, resulting in a loss of vision.

Ukrainian military intelligence reports that the Russian soldiers who committed the atrocities in Bucha are being returned to Ukraine again.

This is the 64th motorized rifle brigade of the 35th the combined arms army of the Russian Federation. The Russian command will not rotate the personnel in this unit and will send it on the front line again. 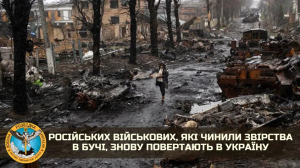 Russian troops are planning a large-scale provocation in Mariupol to blame Ukraine, the SSU informs.

“According to available data, the invaders are preparing a large-scale falsification: they plan to collect the bodies of Mariupol residents killed by the Russians and present them as mass victims murdered by Ukrainian troops. To this end, there are false messages being spread that allegedly “Ukrainians use civilians as human shields.” This is outright nonsense. In fact, it is the Russian troops who are exterminating Mariupol residents – they [the residents] were forced to bury the dead in mass graves in the city back in early March.”

According to intelligence reports, Russian propagandists are trying to divert the attention of the audience from the atrocities committed by the Russian invaders in Bucha.

According to the International Organization for Migration, there are more than 7.1 million internally displaced persons in Ukraine. According to the survey, more than 50% of displaced families have children, 57% have elderly relatives, and 30% have people with chronic diseases.

In Bucha, the invaders tried to burn the bodies of 6 killed civilians, the Office of the Prosecutor General of Ukraine reports.

Investigators inform that during the occupation of the city Russians killed civilians and set their bodies on fire to cover up the crime. These bodies bear traces of violent death and torture.

After Russian occupation, there is practically nothing left of the city of Borodianka, says the head of the humanitarian headquarters of Kyiv region, Oleksiy Kuleba.

“The city is now closed – rescuers and law enforcement officers are working there. We have a lot of work ahead of us. We’ll rebuild everything. Rashists will be held accountable for every crime they committed against Ukrainians,” Kuleba said.

The invaders tortured and abused Ukrainian female prisoners of war who returned to their homeland as part of the exchange, Ombudswoman Lyudmyla Denysova states.

During their captivity, they were taken to Belarus, and then to a pre-trial detention center in Russian Bryansk, where they were tortured and subject to threats. In particular, they were stripped naked in the presence of men, forced to squat down, had their hair cut off, and were constantly interrogated in an attempt to break their morale. Some were forced to appear in propagandistic news reports and demamded to switch to Russian. 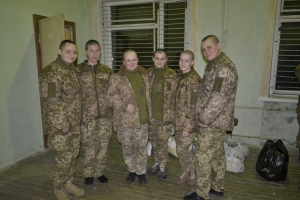 A 32-year-old resident of the village of Hoholiv, Brovarsky district, died from a mine planted in his car by invaders. On April 4, he was heading to the village of Ploske, where he found his car. The man got into the car and drove home, but when he opened the trunk in the courtyard of his house, an explosion occurred. A man died of his injuries, the police of the Kyiv region reports.