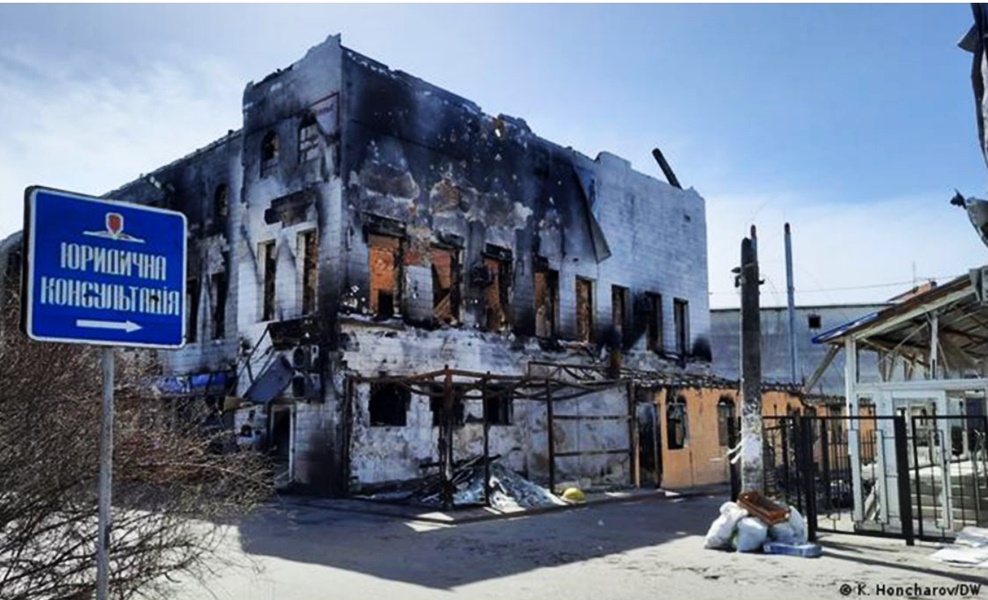 On April 14, Center for Countering Disinformation of the National Security and Defense Council of Ukraine collected a selection of Russian fakes, manipulations and misinformation campaigns.

In particular, in the Ukrainian and Russian segments of social networks, a video is being circulated the main topic of which was the alleged coercion of the Armed Forces of Ukraine servicemen by the representatives of the “Right Sector” to shoot civilians. According to the video, this was supposed to be “revenge for Bucha”. The CCD emphasizes that this is a manipulation.

Another fake is that the Russian Defense Ministry claims that “Ukrainian experts under the supervision of the US scientists took water samples of large rivers of Ukraine to spread the pathogens of cholera, typhoid fever and hepatitis.”

The Russian Defense Ministry also claims that “Ukrainian nationalists plan to blow up the overpass over the railway in Kramatorsk district to accuse the Armed Forces of Russian Federation of destroying critical infrastructure.” The Center for Countering Disinformation at the National Security and Defense Council warns that this is a fake.

The Pentagon commented on the danger of missile strikes on Kyiv.

Pentagon spokesman John Kirby stressed that even when Russia began withdrawing its troops from the Ukrainian capital, from Chernihiv, and in northern Ukraine, the United States did not believe that Kyiv had escaped danger, especially from the air.

Almost 85% of people killed in Bucha had bullet wounds, stated the Mayor of Bucha Anatoliy Fedoruk on the national telethon.

He said that the excavation of the bodies from the mass grave on the territory of the Church of St. Andrew Pyervozvannoho, will probably be completed on April 15.

“We will complete this work: we will exhume the bodies and send them to the morgue to carry out the relevant procedures, and so the relatives could get the bodies of the dead and bury them as they should be,” Fedoruk added.

Operational information from the General Staff of the Armed Forces of Ukraine as of 06.00:

“The enemy continues to launch missile and bomb strikes on the infrastructure of settlements in Ukraine.

In the Volyn and Polissya directions, separate units of the Armed Forces of Belarus perform tasks to cover the Ukrainian-Belarusian border in the Brest and Gomel regions.

The situation in the Siversky and Slobozhansky directions is unchanged.

In the South Buh area, the enemy is trying to carry out fortification equipment positions, replenish stocks of weapons and military equipment, ammunition, fuel and oil. It conducts reconnaissance with the involvement of unmanned aerial vehicles.

In the Donetsk and Tavriya directions, the enemy’s main efforts were focused on attempts to capture the settlements of Popasna and Rubizhne. They were not successful.

Thus, in the territory of Donetsk and Luhansk regions, eight enemy attacks were repulsed in the past 24 hours with four tanks, six armoured personnel carriers, four infantry fighting vehicles, and one enemy artillery system destroyed.”

The Russian military says in a phone call: «It was us who shelled Klimovo»

Russian servicemen fired at Klimovo in the Bryansk region, and then accused Ukraine of it – as if Ukrainian helicopters had done it.

The Russian serviceman stated this during a telephone conversation with his wife, intercepted by the SSU.

“That’s our troops who are f*ucking shooting,” said a soldier who is now in the Donetsk region.

“Why do they do that?” – she asks. The man replies: “It has to be done. This is done in order make it look as if Ukrainians are provoking us.

The same bullshit was in the Chechen war. Apartments were blown up in Moscow, as if terrorists did that. In fact, FSB officers did that. It’s just that now they (Ukraine – ed.) сould not shoot at Klimov from such a distance,” the soldier stressed.

However, he also said that after the shelling of Klimov he decided to write a waiver of his further participation in hostilities in Ukraine.

UN Satellite Center UNOSAT shows the level of destruction of Ukrainian cities during the war according to images from space, this is preliminary data.

Russian military began exhumation of bodies that were previously buried in the yards of residential buildings. Moreover, the invaders forbid to bury people killed by them. In each yard they put their guard, who did not allow Mariupol residents to bury their dead relatives or friends. It is unknown why the exhumation takes place and where the bodies will be sent.

“Given that Ukrainian intelligence has recorded 13 mobile crematoria operating in Mariupol, we can assume that the enemy is trying to cover the traces of their war crimes in our city in every possible way. But they will not work, the whole world is already recording numerous crimes of the Russian army in Mariupol. Every criminalwill be punished! ” – the Mariupol City Council writes.

US Congressmen – Senator Steve Danes and Member of the House of Representatives Victoria Sparts visited Kyiv and the outskirts of the Ukrainian capital after the liberation of cities from Russian invaders.

They became the first American officials to visit Ukraine since the Russian invasion on February 24.

Russian troops opened artillery fire on the city of Vasylivka in the Zaporozhzhia region, which damaged several houses in the city center and the private sector, a shop and depot at the railway station “Tavriysk”. One person was killed and five more were injured.

Prominent actor Hugh Jackman, known for playing mutant superhero Wolverine in the X-men film series, showed a drawing by a Ukrainian boy from Odesa who had to evacuate to escape the war. Later, producer also posted a video recording of his call to the boy.

Occupants shelled residential quarters of Mykolaiv by multiple launch rocket systems, told the Head of Mykolaiv oblast Council Hanna Zamazieieva. She added that Russians shelled territories with no military objects. There are victims.

Security Service of Ukraine reported about obtaining a recording of Russian occupant boasting about atrocities committed to Ukrainian POWs to his friend.

The soldier was identified as 27-year-old Salavat Arsenov from Astrahan. He is a professional soldier that came to bring war to Ukrainian land, trying  unsuccessfully to advance to Zaporizhzhia.

Since the onset of a full-scale invasion, Russian military completely destroyed 22 hospitals. They will have to be built form from the ground up, told the Health Minister during interview for national telethon.

«The level of destruction varies from broken glass to blasted walls, but those hospitals can be recovered after expert examination» he told.

The bodies of more than 900 civilians killed by the Russian occupiers have already been found in the Kyiv oblast.  Many of them died from gunshot wounds, announced the Chief of Kyiv Police Andrii Niebytov.

We have published information about a lot of mass graves. Sadly, those are burials of people killed with small arms. It made us realize that during the occupation, the Russian army established a certain regime. It looked for people respected by the community and forced them to work for Russians”, Niebytov said.

In the occupied Enerhodar in Zaporizhzhia oblast, local entrepreneurs are forced to pay “taxes” to the occupiers and negotiate with the self-proclaimed head of the administration Andriі Shevchyk, said Ombudswoman Liudmyla Denysova.

People at checkpoints are also given leaflets announcing the creation of a “local self-government body” and threatening that “Russia has come forever.”

The occupiers fired at office of “Nova poshta” in the Mykolaiv area, reported the Head of the Mykolaiv Regional Military Administration Vitaly Kim.  According to preliminary information, three people were injured.

«Why fire an expensive missile at a civil office of “Nova poshta”? They assume we hide military there? Or that we use “Nova poshta” to transport munitions? Is this an attempt at intimidating us? If so, setting Nova poshta and a random haystack on fire must have been a very effective way of achieving that», wrote Kim.

On April 15, occupants shelled one of the residential quarters of Kharkiv. 8 people were killed, and 42 were wounded.  There are nine children among the injured, said Maxim Khaustov, the Head of the Regional Health Department, in a comment to «Suspilne».

The Head of the Kharkiv Regional State Administration Oleh Sieniegubov stated that there is an 8-month-old child among the killed.

Since the beginning of the large-scale invasion of the Russian Federation in Ukraine, about 300 bridges have been destroyed, stayed the Minister of Infrastructure of Ukraine Oleksandr Kubrakov.