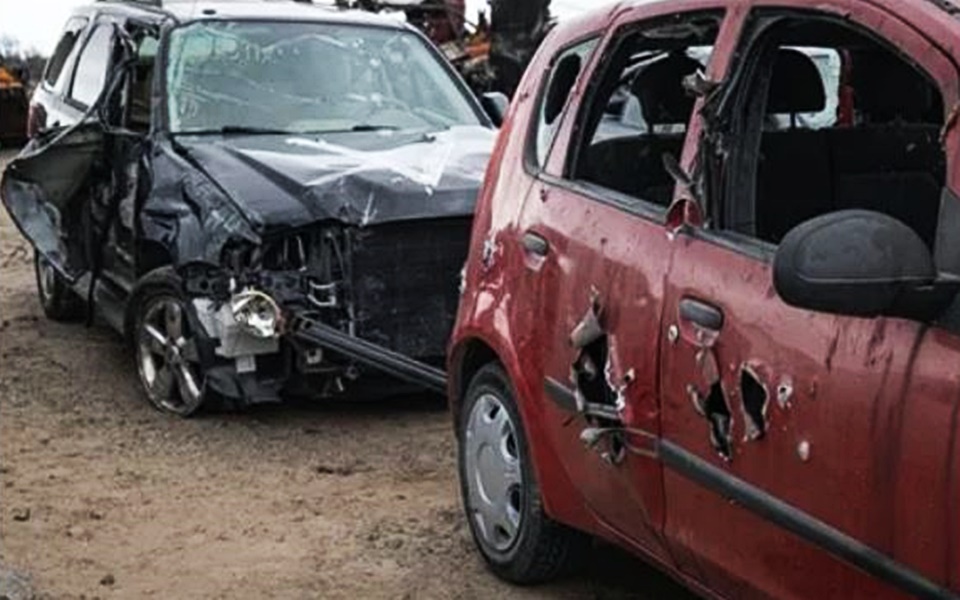 More than 720 bodies of civilians who died as a result of the Russian invasion have been revealed in Kyiv region, 200 civilians more are considered to be missing, says Andrii Niebytov, the head of police in the Kyiv region.

Law enforcement officials are investigating 1463 cases of violations of laws and customs of war committed by Russian invaders in the Kyiv region.
Murders of civilians are among them.

For the first time Biden has described Putin`s actions as the genocide in Ukraine.

“Your family budget, ability to fill up the tank, that’s all should not depend on whether dictator declares war and commits genocide on the other side of the world”, claimed the President of the USA. 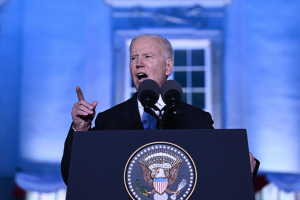 The cemetery of shot-up cars of civilians in Bucha, Kyiv region 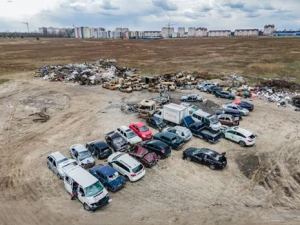 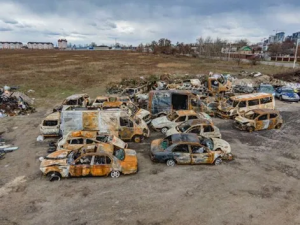 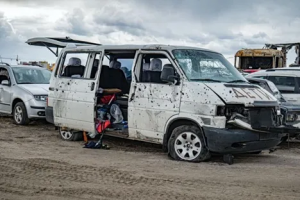 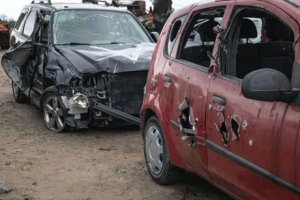 The enemy troops are moving to the east of Ukraine, which is confirmed by satellite images of the Bielhorod region in Russia as of April 11.

The columns of Russian military equipment were seen near such localities as Soloty and Valuiky on the route leading to the border with Ukraine. 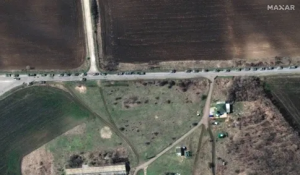 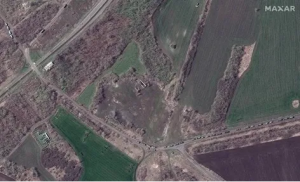 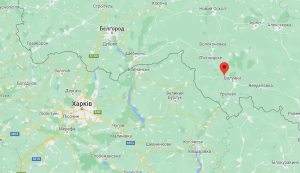 OPCW is concerned about the alleged use of chemical weapons in Mariupol.

191 children died in Ukraine because of the Russian invasion, and more than 349 children were injured.

In particular, when documenting the criminal violations committed by the invaders on the territories of Borodianka and Korolivka in the Kyiv region, burned bodies of a 16-year-old girl and a 10-year-old boy were found.

Russian invaders are accumulating their forces and want to carry out a new attack on the Luhansk region, that is why the government is asking the citizens in these districts not to hesitate with evacuation.

Serhii Haidai, the Head of the Regional State Administration emphasized that as the ceasefire had been broken by the Russians, neither of 5 humanitarian corridors had been agreed upon as of 13 April.
However, people will be evacuated as soon as possible on Wednesday from Hirska hromada, Popasna, Lysychansk, Rubizhne, and Sievierodonetsk.

The village in the Zaporizhzhia region was shelled with the phosphorous bombs by Russians, Ivan Ariefiev, the spokesperson to Regional State Administration, writes on his Facebook according to Ukrinform.

“The roof of the residential building caught on fire as the result of shelling with the phosphorous bombs in Novodanylivka village, Polohivskyi district, on Khrustalkova street. The subdivisions of the State Emergency Service of Ukraine in Zaporizhzhia region were eliminating the consequences. Nobody has suffered as the result of a fire.” the statement reads.

From the beginning of the Russian invasion the State Emergency Service of Ukraine has disarmed more than 58 thousand explosive remnants.

Over the previous day, rescuers and sappers have disarmed more than 3 thousand explosives, including 2 air bombs. 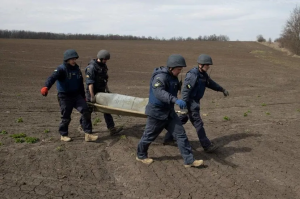 To burn the bodies of civilians in Mariupol, Russians have used 13 mobile crematoria, informs intelligence service.

Russian troops started to use mobile crematoria after genocide of the Ukrainian people in Bucha, Kyiv region, had gained wide international publicity. In particular, 13 mobile crematoriums have been reported to be operating in Mariupol to clear the streets from the bodies of dead civilians.

Invaders are trying to identify all potential witnesses of atrocities at filtration camps and destroy them.

There have been 53 artillery or rocket strikes over the past day in Kharkiv region, seven people are dead, informs Oleh Syniehubov, the Head of the Regional Military Administration.

«Over the previous day, invaders shelled 53 times from Grad MLRs. Unfortunately, over the past 24 hours 22 civilians, including three children were injured as a result of the invaders’ shelling. 7 peopled died. A two-year boy who had been injured by shells several days ago died in the hospital», stated the Head of the Regional State Administration. 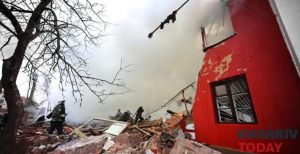 Exhumation of bodies from the second mass grave has started. Two mass graves were found near Andrii Pervozvannyi Church. 57 bodies were taken out of the first grave. The specialists say that there can be much more dead people. 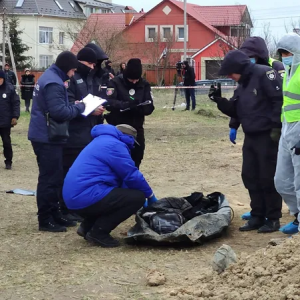 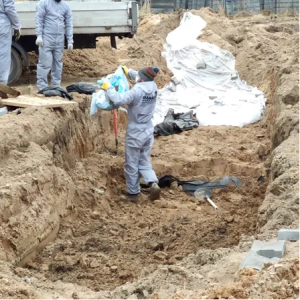 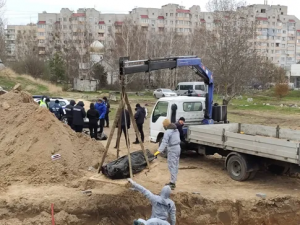 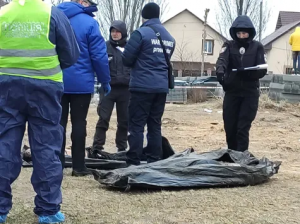 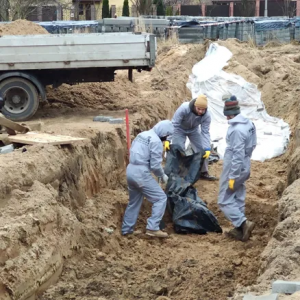 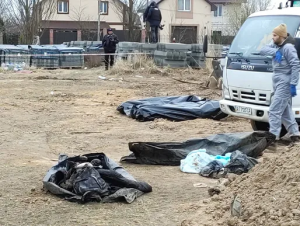 Emmanuel Macron said Ukrainians and Russians were “brotherly nations” and that calling the actions of Russians in Ukraine genocide was inappropriate.

“Today, I would be careful with such terms, because these two peoples [Russians and Ukrainians] are brothers. I want to continue to try to do as much as possible to stop this war and restore peace. “

In the meantime, the US President Joe Biden for the first time said that Putin was committing genocide in Ukraine. The statement of the President of the United States was made during his speech on rising gas prices:

“Your family budget, your ability to fill up your tank – none of this should depend on whether the dictator declares war and commits genocide on the other side of the world.”

In Mariupol, Russians are preparing a “victory parade” for May 9. To hold it, the so-called [installed by Russians] “mayor” was instructed to clean the city center from debris and the bodies of the dead.

In Sumy region more than 100 civilians were killed by Russian occupying forces, the Head of Regional State Administration reports.

The dead were reportedly found with their hands tied, having the signs of torture and gunshot wounds in the head. Also, there are many injured civilians: they are now in the hospitals of Sumy region and neighboring regions.

“The invaders fired at everything, they fired from tanks, submachine guns, grenade launchers and shot civilians, old people with children. Our people hid in the swamps, on farms, in silages. It was terror and horror perpetrated by Russians in our region. ” 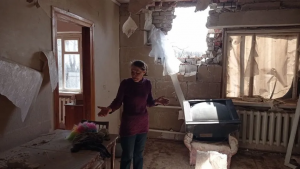 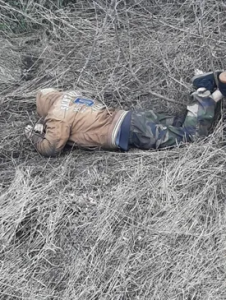 Ukrainian Ombudswoman Lyudmyla Denysova says that In Mariupol, people who agree to move to the Russian Far East are promised 170 thousand rubles “for the start” ($ 1968), 8,500 rubles ($ 95) of social benefits, “housing certificate” for 600 thousand rubles (a bit more than $ 6,000), a mortgage of up to 2% per annum and a hectare of “Far Eastern land”. 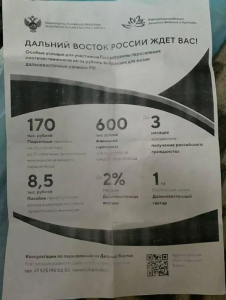 A fake video with the BBC News logo on it is circulating on the Internet. It alleges that Ukrainian military forces were involved in the tragedy in Kramatorsk. BBC urges to check the information only on their official website and not to spread fakes.

Pentagon has earlier denied that Ukraine was responsible for explosion at Kramatorsk railway station. 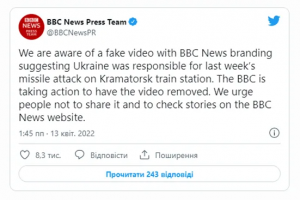 The presidents of Poland and all three Baltic states visited the town of Borodyanka, northwest of Kyiv, on April 13 in a show of support for Ukraine.

Lithuanian President Gitanas Nauseda said the town was “permeated with pain and suffering” after civilians were murdered and tortured there and residential homes and other civilian infrastructure were bombed.

“It is hard to believe that such war atrocities could be perpetrated in 21st-century Europe, but that is the reality. This is a war we must win,” Nauseda said in a statement.

“We will continue advocating for Ukraine’s membership in the European Union & helping this heroic nation overcome the horrors of war,” Nauseda said on Twitter. “Unity is our strength. We will stand with #Ukraine until victory.” 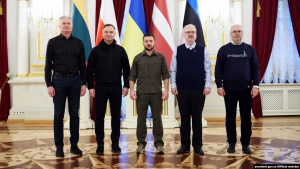 Mariupol City Council spoke about how Russians deliberately created a humanitarian catastrophe in the city.

In particular, Russian artillery and aviation destroyed all buses that had been prepared for the evacuation of local residents, and Russian troops did not release Mariupol residents who wanted to leave.

“The municipality has made a strategic food reserve. Russian army destroyed it. And then it destroyed the biggest grocery stores too. They knew where they were shooting, and they did it on purpose. They wanted people to starve.

“We do not have an order to release you from the city. Come back or we will shoot you,”- invaders said to Mariupol residents at the first checkpoint when they tried to escape from the city (in early March).”

Russia threatens with new strikes on Kiev. The Russian Ministry of Defense has stated that it would launch attacks “at decision-making centers, namely Kyiv” in Ukraine if “sabotage and strikes by Ukrainian troops on Russian territory continue.”