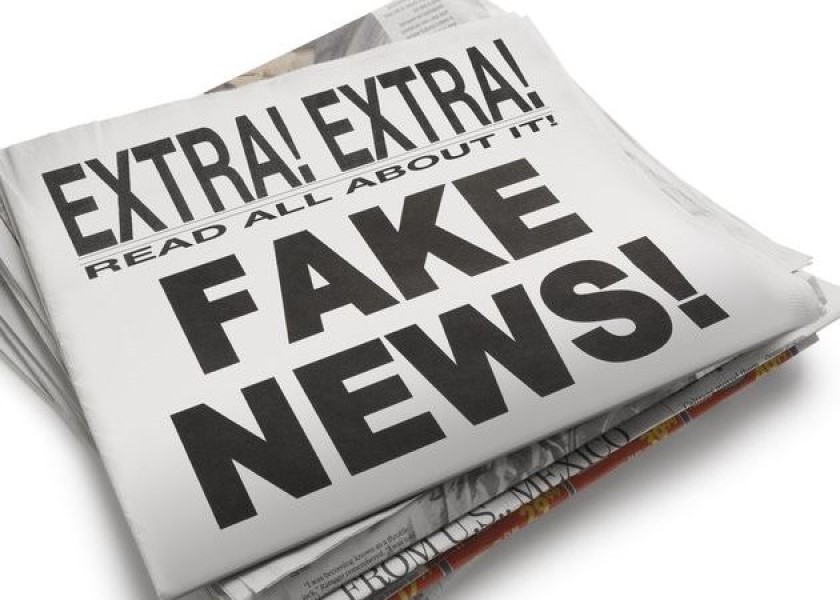 Fake 1: Zelensky remains in Ukraine as he has nowhere to flee

Russian anonymous Telegram channels, affiliated with Russian security and intelligence agencies, are flooded with reports claiming that the only reason President Volodymyr Zelensky hasn’t fled Ukraine is that he has nowhere to run. That’s actually in direct contradiction to what’s been claimed earlier – that Zelensky has long fled the country and his video appearances are shot abroad and then edited to assure the public he’s in Kyiv. The sad thing for the Russians though is that it’s they who have nowhere to run after the international community turned its back on their country. The nation is under a blockade. And things are definitely going to get worse… The whole “Zelensky fleeing” claim has been null and void from the very start. After all, at the very onset of Russia’s invasion, the U.S. and other Western powers offered Zelensky to evacuate to a safe location to keep ruling the country from afar. However, the Ukrainian president turned down the offer right away. Also, today, as we can see, he is not hiding out in a bunker, remaining right there in the capital, alongside his fellow citizens defending the city. Russian Telegram channels have also accused Zelensky of allegedly inciting the war when he supported Petro Poroshenko’s course towards NATO and “abandoned” the Minsk agreements. In fact, it was Putin who tore these agreements into small pieces when he recognized these sham “DPR-LPR” republics.

Fake 2: Ukraine will persecute Crimeans who have served in Russian army since 2014

Here is another piece of Russian “news” – Ukraine will persecute Crimean conscripts, especially those who have been forced to serve in the Russian army since 2014. For some reason, they started talking about this not only in Crimea, but also throughout Russia. Most probably, to add some fuel to the fire, which is already blazing. Literally. Probably, in this way, the Crimeans are told that there’s no way back for them and that retreating or somehow hiding out just will not work. And there will be no neutrality on the table. Russia means Russia, fighting means fighting. It means, there is only one-way out – to mobilize and fight against Ukraine. No mention of the generally accepted norms and rights… In fact, however, according to the norms of international law and Ukrainian legislation, the Crimeans, who were forced to join the ranks of the Russian army or illegal formations, are victims of an armed conflict, not criminals. This means that they are not subject to criminal prosecution by the authorities of Ukraine. Here is the picture that comes out. And it does not coincide with the one that is being imposed on the Russians and Crimeans. Then there are the laws and norms of humanity, which no one can cancel.

Fake 3: Ukrainian diplomats are recruiting Japanese for the war against Russia, which implies that Japan is losing its independence.

Japanese samurai are fighting alongside Ukrainian soldiers, you might have already heard. At the same time, Russian media are trying to twist the picture by claiming that the Ukrainians are attracting them through deceit or even by force. Plenty of Russian media platforms are now spinning a recent statement by MFA Russia’s spox Maria Zakharova, who claims Japan is allegedly “losing its independence in the international arena” by failing to prevent its citizens from fighting on Ukraine’s side. Just like that! Of course, had they been fighting for the Russians, this would have definitely been reported as an act of goodwill. Zakharova claims Ukraine’s foreign embassies and consulates are allegedly forcibly «recruiting» Japanese volunteers for the «international corps.» Can anyone in their right mind imagine a Japanese man be forcibly recruited into the Ukrainian Army? I doubt that. Besides, joining the International Defense Legion is an absolutely voluntary move, and that is exactly why its members are called “volunteers.” The Ukrainian embassy has addressed the reports, decrying the “recruitment” allegations. What diplomats have been doing is providing information on the algorithm for joining the Legion. As of early March, nearly 70 Japanese volunteers have joined the Legion. The Embassy also had to consult with the host government on whether to send volunteers to Ukraine. It is likely that their only role will be to deal with humanitarian aid and other related efforts. Consequently, Russia’s statements that Japan allegedly ignores the fact that its citizens take part in hostilities on the territory of Ukraine do not correspond to reality. In turn, the Ministry of Foreign Affairs of Japan, advised all citizens to evacuate from Ukraine and it is now expected that the country’s citizens will cease all travel to Ukraine, regardless of the purpose of their visit. Zakharova trumpets claims of Japan “losing independence” over the support of “neo-Nazi” forces. It seems today that anyone who doesn’t support Russia automatically becomes a neo-Nazi. At the same time, Russia issues approving reports of Serbian volunteers fighting on the side of the unrecognized “DPR/LPR” (read: on the side of Russia in its war against Ukraine). So much for media standards… What’s allowed for the Kremlin isn’t for anyone else.

Russian media and Telegram channels are spreading reports that the Ukrainian forces have allegedly shelled the settlement of Rubizhne, Luhansk region, in order to paint a “hoax picture” for the West about Russian aggression. But, in fact, who needs to create any “picture”? There’s more than enough real pictures of horror brought by the Russian “liberators”! Take any: Mariupol, Kharkiv, Chernihiv, or Sumy – all shelled, bombed, and gradually being destroyed, at a varying pace. All these cities, incidentally, had been quite loyal to the Russians before the Kremlin unleashed its full-out war on Ukraine. Now things will definitely be different. As they say, there’s only a step from love to hate. Or better say one shot. And when there’s already been thousands of them, what kind of sympathy are we talking about?! What other “pictures” need to be drawn for anyone? Local authorities, who are able to get a firsthand account of what’s happening in their constituencies, report a true picture. And that picture of Russian atrocities is horrifying. The chief of the Luhansk regional administration says Russian “liberators” are cynically destroying residential neighborhoods, killing civilians. At least 27 households caught fire this night alone. Meanwhile, the Ukrainian National Guard ridiculed Russian media reports that claimed the invaders had allegedly gained control of the settlement. The Ukrainian guardsmen even recorded a video, posing on the streets of the town and saying hi to all those who claimed (and those who believed) that Rubizhne had been purged by Chechens and other terrorists. So far it appears that it’s only the Russians (or at least a part of them) who continue to believe all those lies spread by their propaganda media.

Russians are being convinced that the Ukrainian commanders are throwing untrained soldiers into the heat of the battle. This claim can be called anything but plausible. It’s actually outrageously false. On the contrary, it’s the Russian forces that have been suffering massive losses, including due to their soldiers being poorly trained. What’s the reason of deploying unfit forces to the front line or accept them into the army ranks in the first place? It just doesn’t make sense. After all, the Ukrainian Army, indeed, is smaller than the Russian one, so to repel an outnumbering force, well-trained and well-armed defenders are a must. Combat units consist exclusively of those with the appropriate skills, weapons, and supplies. Have you seen those long lines at military enlistment offices across Ukraine? Well, the thing is they only take those with combat experience. Meanwhile, tens of thousands of men – and women – are unable to join the army right away so they have to wait in those lines to be put on various short lists to get their chance. And how about some 200,000 Ukrainians having already returned to Ukraine from abroad? Again, men aren’t fleeing the country, they’re actually coming back to defend their Homeland. Nothing of this kind was seen anywhere in Russia so far, wasn’t it? Russia has failed with its “brilliant” blitzkrieg plan. Ukraine would have never achieved this result had it not been for its well-trained defenders. By the way, according to the latest stats, Russian “liberators” killed more civilian Ukrainians in their homes, on city streets, and along the evacuation routes than they did their Ukrainian combatants (from all defense forces combined) on battlefields. Perhaps it’s those civilians, killed during Russian invasion, that the Russian media label “untrained Ukrainian forces,” who knows?

Fake 6. “Azov” Is Preparing a Series of Terrorist Attacks Against Diplomats of the United States and Other Countries in Lviv

Another nonsense from the Ministry of Defence — we are waiting for terrorist attacks against diplomats in Lviv. And do you know who organize it? Of course, the “Azov” regiment. Who else! Well done guys! Thanks to the imagination of our Ministry of Defence, they manage to do everything — both to fight back in Mariupol and to go to Lviv to carry out a whole series of terrorist attacks against employees of the diplomatic missions of the United States and other countries. The representative of the RF Ministry of Defence Igor Konashenkov, who tells us fresh news twice a day, seasoned with fresh fakes, even stressed that the leadership of the Kyiv regime is informed about the plans of the nationalists, but does not take any action to prevent their implementation. And the Kyiv nationalist regime is planning to represent attacks on diplomatic facilities of the United States and Western countries as allegedly a targeted attack by the Russian Armed Forces. And this is all in order to have leverage on the NATO countries to close the sky over Ukraine. You know, so many of these levers have already been created that there is no need the Ministry of Defence to try so hard and fantasize about it. It seems, they forgot what they really should do: judging by the name, to defend. Well, something went wrong here. Probably, they decided there, as in the proverbial phrase “attack is the best form of defence”. By the way, “Azov” is just a volunteer battalion, once created as a special police patrol regiment of the Ministry of Internal Affairs of Ukraine and was based in Mariupol. Therefore, it is definitely busy with other things — it is defending Mariupol, which has already become a terrible besieged city, but which does not give up.