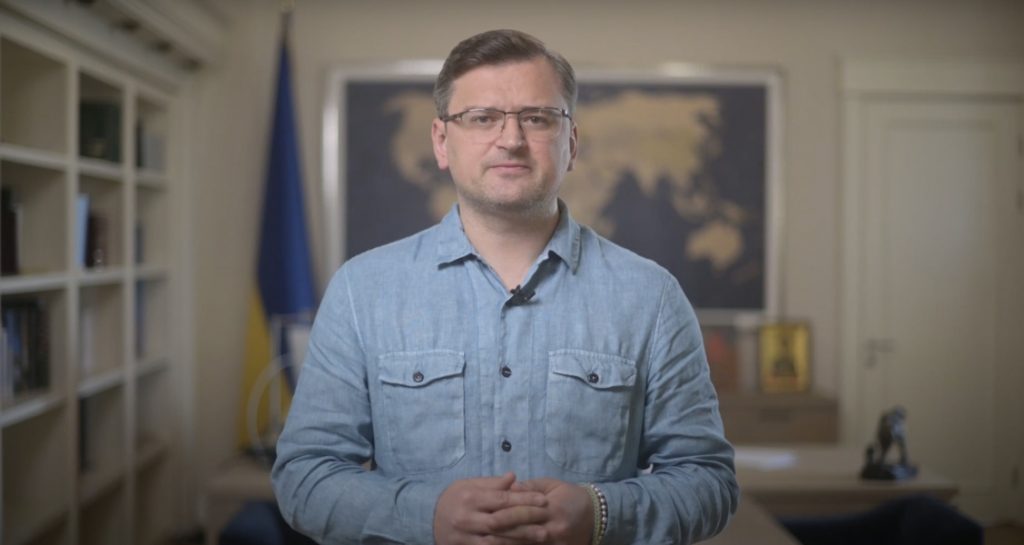 «Dear participants, friends!
I regret I cannot be with you in Bratislava today, but I thank the organizers for the opportunity to address you.
First of all, let me express how deeply we in Ukraine are grateful to Slovakia. Slovaks have stood by us resolutely since the very first days of the invasion. We will always remember this and I also thank my counterpart Ivan Korcok for his personal engagement.
This Friday marks one hundred days since Russia launched its unprovoked and unjustified war of aggression against Ukraine. Hundred days of Russian horror, destruction, murder, looting, in rape. But also hundred days of heroism, bravery, and humanity of Ukrainians. Hundred days of solidarity and support of our friends and partners around the globe.
Despite all odds and with your consistent support, Ukraine still stands both feet on the ground. At a very high cost, we have won a number of important battles. The war is now raging in the South of Ukraine and in the East, where combat is especially bloody and difficult. Hundreds of thousands of brave Ukrainians are fighting the Russian army, but we need to equip them properly to outgun Russia’s enormous advantage in artillery. This is why we urgently need more NATO-style heavy weapons for our military to push the Russians back. Especially the 155th caliber. I use this opportunity to call on partners to deliver additional material as soon as possible.
As a foreign minister I would prefer to talk about diplomacy, not guns. Unfortunately, Russia leaves no such choice. Ukraine has proposed diplomatic solutions numerous times. Before the invasion and after it has already started. Russia has consistently rejected any diplomacy and prioritized war only. Today, they remain squarely focused on seeking military solutions. The only way to force Russia to return to the negotiating table is to defeat it on the battleground. It must become clear to Putin that he will not be able to reach a military solution.
As the war drags on for its fourth month, there is a discussion in the West on what our war aims should be. First of all, I want to make it clear that it is Ukraine and the people of Ukraine who will define this war’s aims. We are fighting a just defensive war against invaders who came to our land to literally annihilate us, deprive us of our identity and our right to exist. Russia’s genocidal intent has become apparent after massacres in Bucha, Borodyanka, Irpin, Mariupol, and many other towns and villages.
This is why we fight not for political or economic purposes, but for the right of our people to live. We will do so as long as it takes to survive and prevail. We call on our allies and partners to drop ambiguous language and set goals straight. It is true that Russia must not win and Ukraine must not lose. But why don’t we set a positive and clear goal in three words: Ukraine must win. When we all set this goal clearly, ways to achieve it will become much clearer too.
Dear friends, With the war entering a longer phase, we hear voices proposing unrealistic ways out of this war: cede territories or make other painful concessions that, in their view, would pacify Putin. Suggestions like these are ill-advised and invite more war, not pave the way to peace. We have followed this path from 2014 to 2022. It has only brought us to a new catastrophe. Russia wants to physically destroy Ukraine and kill as many Ukrainians as possible. Given such a choice the only way out is to force Putin into failure.
Do not worry about his face. He has enough tools at his disposal to save it. His propaganda within Russia can literally direct public opinion in any direction. And he does not need real facts for this. Should he order to withdraw his forces, he will easily explain it to the Russians. They will be told that the Russian army has fulfilled all tasks of demilitarization and denazification by destroying this and that quantity of Ukrainian units, vehicles, facilities, and so on.

The whole idea that Putin is cornered and has no way out is a self-imposed illusion.
On the contrary, Ukraine can and must win. Win peace for itself and for the entire Europe.
Ukraine’s victory will be our shared victory. It will ensure generations of Europeans can live in freedom, peace, and stable development. Instead of suggesting how to save Putin’s face or feed him more Ukraine’s territories and lives, we should all focus on ways to push Russia back.
We feel the support and solidarity of our partners, and we are deeply grateful for it. These are weapons, macro-financial assistance, funds for rebuilding our infrastructure, hospitality towards our refugees, and many other signs of global support. We urge you to continue it as long as it is necessary for Ukraine to prevail.
We didn’t ask Putin to go all-in. It was his own choice which he must pay for. Ukraine never wanted this war, but we will be the ones to end it. Sooner rather than later and at a lower cost if we receive all the necessary assistance on time. Ukraine will be a verdict to Putin’s regime.
Thank you for your attention and I wish you a productive discussion today.»