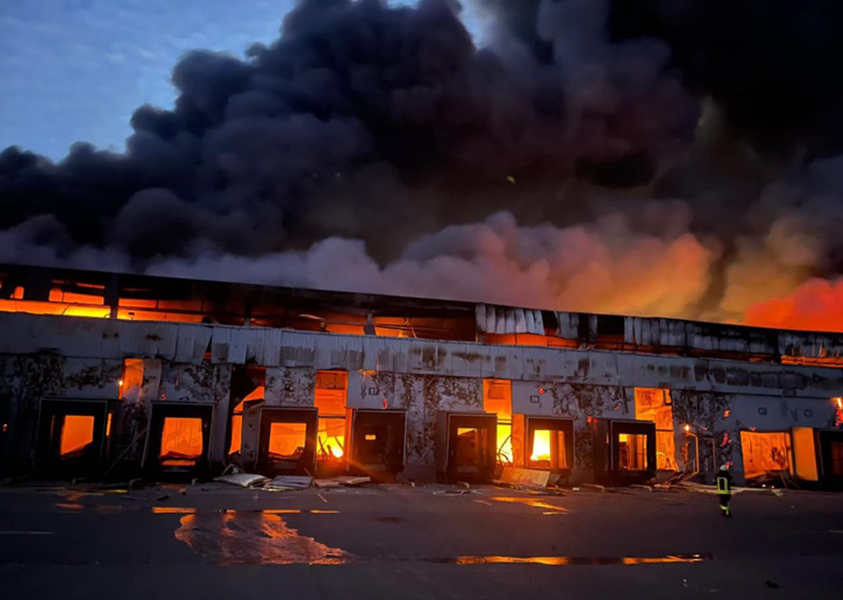 Fights against the invaders in Mykolaiv, which has been shelled by Russian troops from heavy artillery since the evening of 11 March, are still ongoing – the State Border Guard Service of Ukraine reports.

“Fierce fighting is raging in Mykolaiv now”, – SBGSU further notes in the statement.

A warehouse near Brovary caught on fire as a result of hostile shelling.

Tentatively, there are no casualties. State Emergency Service of Ukraine brought 20 employees and four units of equipment to extinguish the fire.

Chernihiv was left without electricity, water, heat and gas, Vyacheslav Chaus, Head of the Chernihiv Regional Military Administration announced during his briefing on Facebook.

“The enemy continues to launch air and missile strikes. Peaceful people are dying. Yesterday a bomb hit the hotel “Ukraine”. The hotel is gone, but Ukraine is not and fights on. Currently Chernihiv has no electricity and almost no gas, water and heat supply. I think we will restore electricity today. No electricity means no water and no cellular communication. We are restoring it, but the enemy is cutting it off again. Let’s stay strong and do everything we can to make the enemy fall near Chernihiv,” Chaus said.

Buses for evacuation of civilians and humanitarian aid trucks have departed from Zaporizhzhia to Mariupol, as announced by Alexander Starukh, Head of the Zaporizhzhia Regional Military Administration, in telegram channel.

“The humanitarian convoy headed to Mariupol, accompanied by the Red Cross and clergy, has left Zaporizhzhia. The fifth attempt to save civilians must be successful!”, he wrote.

As Pavlo Kyrylenko, Head of the Donetsk Regional Military Administration, reports on his Facebook, it is planned that the humanitarian convoy will deliver more than 90 tons of food and medicine.

Severodonetsk is being continuously shelled from Grad rocket launchers by the invaders, Serhiy Haidai, Head of the Luhansk Regional Military Administration reports on Facebook.

“Severodonetsk, morning of March 12th. Every morning these Russian Nazis wake the town residents with Grad shelling. The occupiers want to wipe Severodonetsk off the map! Russians are killing Severodonetsk! The city is in ruins, the inhabitants are hiding in bomb shelters, lately you cannot even peep out of there because of the firings”, Head of the Luhansk Regional Military Administration writes.

Residents of Melitopol went to a rally in front of the seized regional administration building and demand the release of their Mayor Ivan Fedorov.

The airport in the Vasylkiv town, Kyiv region, was completely destroyed after being hit by 8 enemy missiles, Natalia Balasynovych, the Mayor of Vasylkiv reports.

According to the General Staff of the Armed Forces of Ukraine, the occupiers seized the eastern outskirts of Mariupol. In general, as for the Donetsk and Tavriya directions, enemy’s efforts are focused on capturing the cities of Mariupol and Severodonetsk.

Units of the occupiers that held the assault in the Donetsk operational area, met strong resistance of the Armed Forces of Ukraine and lost offensive capabilities.

Main Directorate of Intelligence of the Ministry of Defence of Ukraine: the occupying army legalizes looting due to deterioration of logistics, inability to properly deliver fuel, ammunition, food and equipment. This means that Russian troops will take away everything the local population needs: they will loot warehouses, stores, pharmacies, and so on.

“Now the main task of the occupiers is to secure the existing positions by hiding behind the local population.

At the same time, units of Putin’s troops remain cut off from supplies indefinitely and were ordered to switch to “self-sufficiency” until further notice.

So the photos of looting events that have been recently shared all over the world are not isolated cases. In addition, they are accompanied by numerous cases of serious crimes against civilians: murder, torture, rape. There are victims among minors. ”

“The occupiers are calling the deputies of the Kherson regional council to ask if we are ready to cooperate with them. We will flatly refuse. <….> The establishment of the Kherson People’s Republic will turn our region into a hopeless hole without life and future. Don’t give them a single “yes” vote! Do not give them any opportunity to legitimize the Kherson People’s Republic! The whole country will watch you, and there can be no excuses for cooperation with the occupiers! I will not believe that you will be in a worse situation than ordinary people of Mariupol, Chernihiv, Kharkiv, Sumy, Gostomel, who have been enduring inhuman suffering for two weeks, but are not giving up! Be sure you enter the history of Ukraine not as traitors that no one needs, but as true citizens whose names will be remembered by future generations. ”

As of the morning of March 12th, more than 960 thousand consumers in Ukraine have been left without electricity because of hostilities. The most difficult situation with electricity supply is observed in Donetsk, Kyiv, Kharkiv and Chernihiv regions, according to the Ministry of Energy of Ukraine.

Up to 264 thousand consumers were left without gas supply. The situation in Kyiv, Donetsk and Zaporizhzhia regions is difficult.

The Security Service of Ukraine intercepted conversations of occupiers: in Kharkiv they were given the order to shoot at civilians. This is how the true face of “peacekeepers” is revealed.

“There are few of us here, we are surrounded. Now we have been given the order to f*cking knock them dead, all of them: civilians, children or not… knock all of them dead, all. Just now, a sniper sitting on the tower killed three people behind the fence, who were just shining a flashlight in our direction,” one of the occupiers said in the interception presented by the SSU.

In Kherson, people went to a rally against the occupiers, the Center for Strategic Communications and Information Security reports. Participants went on a peaceful protest in the central square of the city with posters: “We are Ukrainians, not Katsap [ed. Russian] slaves!”,“Glory to the soldiers of Ukraine!”, “We cannot be defeated! Ukraine will win!”

In Kharkiv region, the church of Holy Myrrh-Bearers, the Dormition Cathedral and the church of Queen Tamara in Pyatyhatky were damaged by the occupiers’ shelling.

Sumy region. Today 10.088 people were evacuated through the “green corridor”.

Number of people who managed to leave: 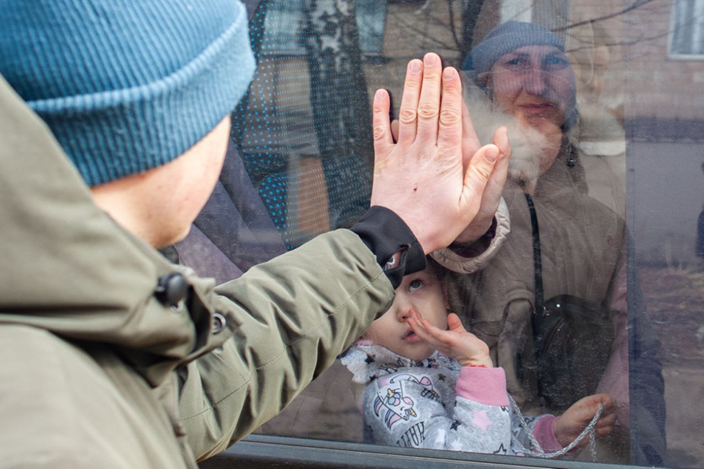